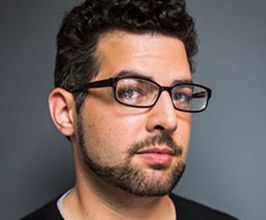 Book Zak Ebrahim for your event

Zak Ebrahim was born in Pittsburgh, Pennsylvania, on March 24, 1983, the son of an Egyptian industrial engineer and an American school teacher. On November 5th, 1990, when Ebrahim was seven years old, his father assassinated Rabbi Meir Kahane, leader of the Jewish Defense League. In 1994, the men Ebrahim looked up to and called “Amu”—Arabic for uncle—were convicted of detonating a van filled with 1,500 pounds of explosives in the sub level parking lot of the World Trade Center’s North tower. Ebrahim’s father was eventually convicted for his involvement in the overall plot, which included attempts to bomb a dozen New York City landmarks including tunnels, synagogues, and United Nations headquarters. Osama Bin Laden helped pay for Nosair’s legal defense for his trial and in one of his infamous video messages, Bin Laden urged the world to “Remember El-Sayyid Nosair.”For Ebrahim, a childhood amid terrorism was all he knew. After his father’s incarceration, his family moved more than twenty times, hiding his identity from those who knew of his father while still being haunted by and persecuted for his father’s crimes. Though his radicalized father modeled fanatical beliefs, the hateful ideas never resonated with the shy, awkward boy. The older he grew, the more fully Ebrahim grasped the horrific depths of his father’s acts. The more he understood, the more he resolved to dedicate his life to promoting peace. He now speaks out against terrorism and spreads his message of peace and nonviolence.In 2013, he participated in TED’s talent search in New York City, and was selected to speak at the main conference, TED2014, in Vancouver, BC. His TED talk was released on Sept 9, 2014, in conjunction with the publication of his TED Book, “The Terrorist’s Son: A Story of Choice,” and has been viewed more than two million times. In the book, as in his speeches, Ebrahim traces his remarkable journey to escape his father’s terrible legacy, coming to realize that the only way to overcome the challenges of his past would be to help others understand that hatred only produces more hate, but belief in non-violence heals. Those cycles of violence, no matter how old, do not have to continue forever. Crisscrossing the eastern United States, from Pittsburgh to Memphis, from a mosque in Jersey City to the Busch Gardens theme park in Tampa, Ebrahim’s story is one of a boy inculcated in dogma and hate—a boy presumed to follow in his father’s footsteps—and the man who chose a different path.Contact a speaker booking agent to check availability on Zak Ebrahim and other top speakers and celebrities.