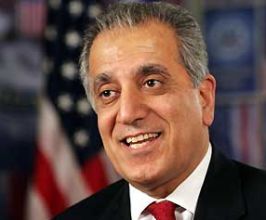 U.S. Counselor at the Center for Strategic and International Studies (CSIS) & President of Khalilzad Associates

Book Zalmay Khalilzad for your event

Dr. Zalmay Khalilzad serves as President and Chief Executive Officer of Khalilzad Associates. Dr. Khalilzad also serves as a Counselor of Center for Strategic and International Studies, Inc. (CSIS). He maintains close ties with high-level leadership throughout the Middle East and Central Asia.From 2007 to 2009, he served as the United States Ambassador/U.S. Permanent Representative to the United Nations. From 2005 to 2007, he was U.S. Ambassador to Iraq. From 2003 to 2005, he served as the U.S. Ambassador to Afghanistan. He also served as United States Special Presidential Envoy to Afghanistan from 2001 to 2003. He served as Presidential Envoy and Ambassador at large for free Iraqis. He served as US Ambassador to the United Nations. He also served at the National Security Council as Special Assistant to the President and Senior Director for Islamic outreach and Southwest Asia initiatives and, prior to that, as Special Assistant to the President and Senior Director for Southwest Asia, Near East, and North Africa affairs. He headed the Bush-Cheney transition team for the Department of Defense and served as a Counselor to Secretary of Defense Rumsfeld.From 1993 to 1999, he served as Director of the Strategy, Doctrine & Force Structure Program for RAND’s Project Air Force. He founded Center for Middle Eastern Studies. From 1991 to 1992, he served as an Assistant Deputy Under Secretary of defense for policy planning, U.S. He also served as a Senior Political Scientist at RAND. From 1985 to 1989, he served at the Department of State and served as Special Adviser to the under secretary of state for political affairs, working policy issues and advising on the Iran-Iraq War and the Soviet War in Afghanistan. He serves as the Chairman of the Board of Khalilzad Associates. He serves as First Vice Chairman and Director at American University Of Afghanistan. He has been a Director at National Endowment For Democracy Inc. since January 2010 and RAK Petroleum Public Company Limited since 2010. He serves on the boards of the America Abroad Media, the Center for the National Interest, the Atlantic Council and the American University of Iraq in Suleymania. He served as a Non-Executive Director at Tethys Petroleum Limited from July 2012 to November 2014 and DNO International ASA since June 2010. From 1979 to 1986, he served as an Assistant Professor of Political Science at Columbia University. He also served as an Associate Professor at the University of California at San Diego from 1989 to 1991.He is the Author of more than 200 books, articles, studies, and reports, and his work has been translated in many languages, including Arabic, Chinese, German, Japanese, and Turkish. He is regularly called upon to provide strategic advice to numerous heads of state. He appears frequently on US and foreign media outlets to share his foreign policy expertise. Secretary of Defense of Iraq, Robert Gates awarded him the Department of Defense Medal for Outstanding Public Service. He is a very well known and respected diplomat in the Central Asian/Caspian/Middle East region. His honorus includes: President Hamid Karzai awarded him Afghanistan’s highest medal-the King Amanullah Award and Secretary of Defense Donald Rumsfeld awarded him the Department of Defense Medal for Outstanding Public Service for his work in Afghanistan.Dr. Khalilzad received his BA and MA degrees from the American University in Beirut, Lebanon. He has a Ph.D. from the University of Chicago.Contact a speaker booking agent to check availability on Zalmay Khalilzad and other top speakers and celebrities.