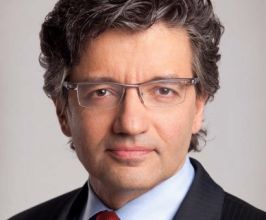 Founder and President of the American Islamic Forum for Democracy

Zuhdi Jasser, M.D. is the Founder and President of the American Islamic Forum for Democracy (AIFD). A devout Muslim, Dr. Jasser founded AIFD in the wake of the 9/11 attacks on the United States as an effort to provide an American Muslim voice advocating for the preservation of the founding principles of the United States Constitution, liberty and freedom, through the separation of mosque and state. Dr. Jasser is a first generation American Muslim whose parents fled the oppressive Baath regime of Syria in the mid-1960’s for American freedom. He is leading the fight to shake the hold that the Muslim Brotherhood and their network of American Islamist organizations and mosques seek to exert on organized Islam in America.AIFD seeks to counter political Islam the ideology that fuels radical Islamists. AIFD’s current passions include the Muslim Liberty Project (MLP) and involvement in the newly formed American Islamic Leadership Coalition (AILC). The Muslim Liberty Project seeks to instill the ideas of liberty into young Muslim adults in order to inoculate them against the viral threat of political Islam. The project brought together its first class of Muslim Youth in March 2011 with tremendous success. AILC is a broad based coalition of diverse Muslim organizations that provide a stark alternative to the domestic and global network of Islamist organizations.Dr. Jasser is also actively involved in the Syrian-American community as the co-founder of Save Syria Now! which was formed by Americans of Syrian descent to put pressure on the United States to call for immediate action to end the regime of Bashar Assad of Syria and to help bring true liberty to the people of Syria. Dr. Jasser has also been asked to play a formative role in the emerging Syrian Democracy Council which is creating an opposition roadmap for a free, secular, and non-Islamist post-Assad Syria. Dr. Jasser briefed members of the U.S. House of Representatives on the situation in Syria in July 2011.Dr. Jasser regularly briefs members of the House and Senate congressional anti-terror caucuses on the threat of Political Islam. Dr. Jasser testified before the United States House of Representatives Committee on Homeland Security on March 10, 2011 on “The Extent of Radicalization in the American Muslim Community and that Community’s Response” and again on June 20, 2012 on the “The American Muslim Response to Hearings on Radicalization within their Community.” On June 24, 2011 Dr. Jasser testified before the Constitution Subcommittee of the Judiciary Committee of the United States House of Representatives on the importance of HR 963 “The See Something, Say Something” Act of 2011. On March 20, 2012, Dr. Jasser was appointed by Senate Minority Leader Mitch McConnell (R-KY) to the United States Commission on International Religious Freedom (USCIRF).Dr. Jasser is an internationally recognized expert in the contest of ideas against political Islam and American Islamist organizations. He has been featured in the Wall Street Journal, The Washington Times, The New York Post, The Dallas Morning News, CNN, CBS, Fox News Channel, MSNBC and BBC in addition to nationally syndicated radio programs. He has spoken at hundreds of national and international events including universities, places of worship, and government venues. In just the past year he has spoken at the Hudson Institute’s “The Perils of Global Intolerance: The UN and Durban III,” The U.S. Strategic Command’s 2011 Deterrence Symposium panel on “What did the rest of world learn about deterrence from the recent upheavals in the Middle East and Africa?,” and at the National FBI National Executive Institute on “Whose Voice are you listening to? What are the questions we should be asking?” In the past, Dr. Jasser has lectured on Islam to deploying officers at the Joint Forces Staff College at Norfolk, VA and was part of a select Muslim group that briefed Admiral Mike Mullen, Chairman of the Joint Chiefs of Staff, on the “Contest of Ideas with the Muslim World.”Dr. Jasser was presented with the 2007 Director’s Community Leadership Award by the Phoenix office of the FBI and was recognized as a “Defender of the Home Front” at the annual Keeper of the Flame Dinner of the Center for Security Policy in 2008. Dr. Jasser is a contributing writer to a number of books and is the author of The Battle for the Soul of Islam: An American Muslim Patriot’s Fight to Save His Faith. He is featured in four documentaries America at Risk, Islam v Islamists, A Question of Honor and The Third Jihad.Dr. Jasser earned his medical degree on a U.S. Navy scholarship at the Medical College of Wisconsin in 1992. He served 11 years as a medical officer in the U. S. Navy. His tours of duty included Medical Department Head aboard the U.S.S. El Paso which deployed to Somalia during Operation Restore Hope; Chief Resident at Bethesda Naval Hospital; and Staff Internist for the Office of the Attending Physician to the U.S. Congress. He is a recipient of the Meritorious Service Medal. Dr. Jasser is a respected physician currently in private practice in Phoenix, Arizona specializing in internal medicine and nuclear cardiology. He is a Past-President of the Arizona Medical Association.Contact a speaker booking agent to check availability on Zuhdi Jasser, M.D. and other top speakers and celebrities.