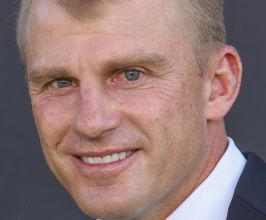 Book Zvi Eckstein for your event

David Eckstein is a two-time National League All-Star shortstop and former lead off hitter for the world champion Anaheim Angels and St. Louis Cardinals. Eckstein was named the 2006 World Series Most Valuable Player.Born in Sanford, Florida in 1975, Eckstein had medical problems at a young age. Eckstein was born with a stomach blockage, and doctors failed to diagnose the problem quickly. Unable to digest any food or keep solids down, Eckstein’s parents, who are both schoolteachers, finally found a physician that was able to perform surgery to correct the trouble. Two of Eckstein’s siblings needed kidney transplants, due to a disease that runs in the family, and Eckstein’s father also needed the procedure. Eckstein was more than willing to donate one of his kidneys to his siblings and dad, but his father would not allow it; all of the family members were able to have the transplants using donated kidneys from other sources.Eckstein made the University of Florida baseball team as a walk-on, later receiving a scholarship. A good student, to say the least, because of his parents’ emphasis on education, David was a three-time Southeastern Conference Academic Honor Roll selection and is the only Florida player to become a GTE Academic All-American twice. The Red Sox signed Eckstein in the 19th round of the free agent draft in 1997, and David hit .300 at every stop in their farm system until he reached Triple A Pawtucket. When he started slowly there in 2000, Red Sox coaches tried to get him to change his batting style, but when that experiment failed, he went back on his own to his old ways and brought his average up almost 85 points before the season ended. But the Red Sox were not enthralled with the 165 pound second baseman’s abilities, and they let him go in August of that year, opting instead to resign journeyman Lou Merloni in his place. The Angels liked what they had seen of Eckstein though, and they picked him up on waivers. By 2001, David was their full time shortstop.During the 2006 regular season, Eckstein batted .292 with 18 doubles. In 2005, he established career highs with a .294 batting average, 185 hits and 58 walks in his first season with St. Louis. Eckstein was also a starter for the 2002 World Series champion Anaheim Angels.Eckstein, a member of the National League All-Star team in both 2005 and 2006, was a fan favorite wherever he played and at just 5 feet 7, was considered to be the toughest little guy in baseball.Contact a speaker booking agent to check availability on Zvi Eckstein and other top speakers and celebrities.